The common question when tourists meet other tourists: “So what was your favorite thing you’ve done so far?” In Budapest I always found myself unsure of how to answer this question. What was my favorite site? Tour? Experience? My answer sounded boring and not what they were looking for. “Just walking around” I would say smiling, yet feeling like I was letting them down.

But it was the truth. Budapest is one of the most beautiful and interesting cities I’ve ever seen. The eclectic mix of old and new architecture, and the prominence of the Art Nouveau style, made walking the streets like walking an art gallery. George Ezra’s song “Budapest” has a clearer meaning for me now. If he’s going to be giving up a house in Budapest for this woman, she must be absolutely amazing. 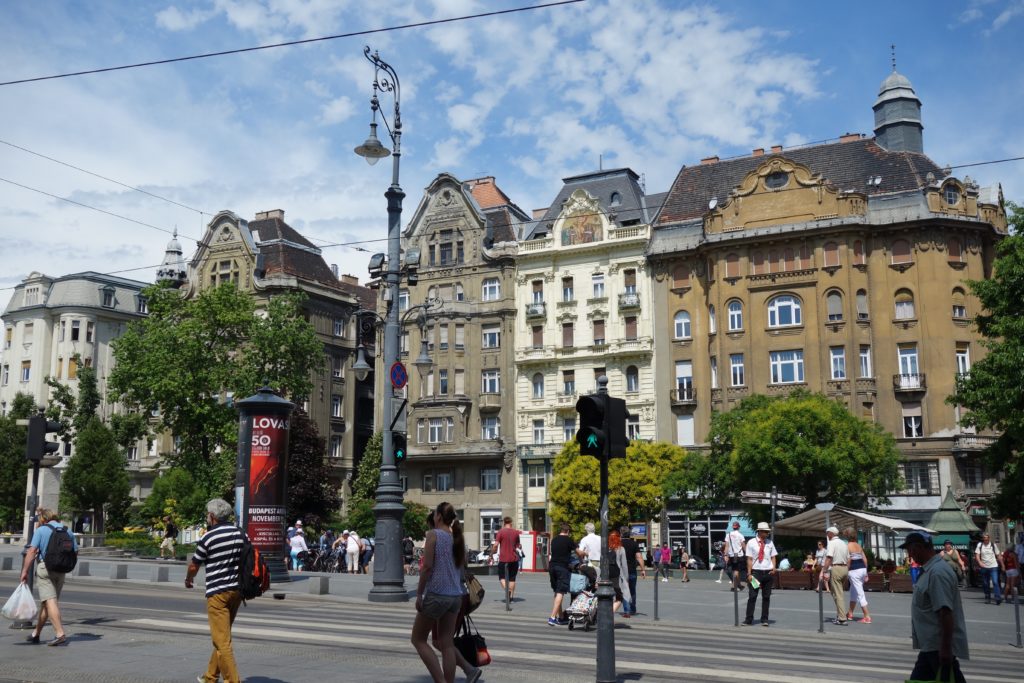 There is more to do in Budapest than just walking and admiring the views, although I do highly recommend it. There is also WWII history to cover (and prior), stories of fascism and communism, plus parks, restaurants, thermal baths, and the well-known ruins pubs. Quite a mix!

One thing I loved about the Hungarians I met was their desire not to falsify the past. Hungary is somewhat known for choosing the wrong side, including having joined Hitler’s Nazi army in WWII. The desire for truth and honesty is represented in Liberty Square, where a “German Occupation Monument” had been erected, showing the imperial eagle of Germany over the archangel Gabriel, meant to symbolize Hungary’s innocence. People of Budapest have been protesting this monument and the hypocrisy of it for nearly three years (1000 days and counting) with daily gatherings and a Living Memorial, composed of photos and personal items of those killed during this dark time during WWII. They want everyone, especially the Hungarian government, to face the past with responsibility so as not to repeat it. Their point is that Hungary was in alliance with the Third Reich, therefore could not be “occupied”. Hungary was not innocent, as the government’s monument tries to convey.

The House of Terror is a historical museum capturing the horrible deeds of fascism and socialism during and after WWII. It is a terrible reminder of a dark time when political police and security services jailed people for years with no real cause, tortured for information, and kept people in the most inhumane of conditions. The write-ups in each room are thorough and can be taken away, and there are also audio guides available. A group of young men were behind me as I entered, laughing and enjoying each others’ company. They were silenced quite quickly by the images and information. It’s a sobering and important memorial.

Moving on to the lighter side of Budapest…

A tour of the Budapest Parliament building shouldn’t be missed (and is best to book online in advance, or go in the morning and book your tour for an opening slot later in the day). The building’s neo-gothic architecture is impressive from the outside, and the inside is as majestic as one would imagine. I’m not typically impressed by crown jewels, but they are there and they are impressive. The crown has been lost or stolen several times in its history, and therefore after WWII was given to the American army for safe keeping from the Soviet Union. It was eventually returned in 1978.

The Dohány street synagogue is the biggest synagogue in Europe and second largest in the world (largest is in Jerusalem). It’s gorgeous inside and worth stopping inside and taking the tour.

And of course, one of the most popular attractions in Budapest are the thermal baths. The baths are definitely worth going to for a relaxing morning or afternoon, but if you’re a woman or with a woman, be sure to choose one that is coed as several are for men only during the week. In this day and age I find that ridiculous, even if the intent is to keep with the historical Turkish tradition, and as an American woman I don’t like being told I can’t do something because I’m a woman. So I chose the Széchenyi Baths which are coed seven days a week. Gellert baths are also popular and coed all of the time. Rudas baths were highly recommended by my Airbnb host, but are men-only during the week. Most baths open at 6 AM, and if you go early, you’ll enjoy a more relaxing visit with the older Hungarians of the city. A few hours later you’ll be joined by the crowds.

Along with the thermal baths, the ruins pubs are a big attraction in Budapest. I had heard a lot about them, but not being much of a drinker or partier (those that were with me at New Year’s, shut up), I wasn’t all that interested. But it turns out you can hardly avoid them – the pioneer ruins pub Szimpla Kert is on the route of the walking tours. And there are numerous pub tours now offered. I saw these clubs as an interesting way to reuse stuff, probably a crazy fun way to party and dance all night for the younger crowd, and a bit of a fire hazard? I’m old, I know. I’m not the target for ruins pubs.

Of course a big part of travel is often to find the best restaurants, trying the local cuisines of the countries you visit. None of us want to be that tourist that won’t eat the local food. But in a place like Hungary, I really think you can be forgiven for not going for it more than a couple of times. That’s my hope anyway. I just don’t love that heavy meaty Hungarian food, but had some great Thai, Indian, Mediterranean and European dinners. Budapest has a ton of great restaurants, most of which are not Hungarian, so feel free to explore.

Budapest’s reputation of an all-night party culture is just one small piece of this dynamic city. It has something for everyone, whether you are out until 6 AM drinking and dancing, up at 6 AM running or bathing in the thermal baths, or just out all day admiring the city.

For more photos of Budapest, see the photo gallery.